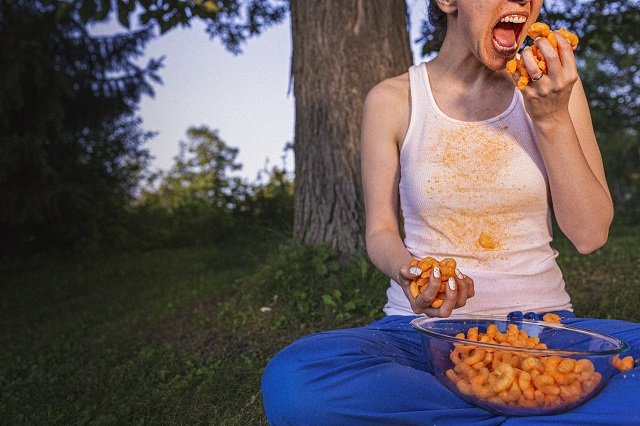 In one of our latest weird news, a paraglider makes his first-ever legal flight from Mount Everest captured on the camera

The bizarre news in India Times captioned: South African Paraglider Makes First-ever Legal Flight From Mount Everest, Captures It On Camera, revealed that a courageous paraglider from South Africa has made the first legal flight from the world’s tallest mountain – Mount Everest.

This paraglider named Pierre Carter leapt off close to the summit at an altitude of nearly 8,000 meters. He cruised around the snow-capped mountains of the Himalayas.

As his team members descended by foot, Carter cruised down at 50 miles per hour and reached his destination in 20 minutes which was the small settlement of Gorakshep, which is at an altitude of 5,164 meters or about 3.2 miles.

By completing the feat, Carter became the first person to achieve such a milestone after legally getting a permit from the Nepali government.

Carter hasn’t been the only person to cruise from Mount Everest, three teams have already covered the amazing distance before him, but it is attributed to the 56-year-old for being the first legal paraglider to descend the world’s highest mountain after obtaining a permit from the Ministry of Culture, Tourism and Civil Aviation from the Nepali authorities.

Could a snail that seems slow and harmless force a part of a state into quarantine? Unexpectedly, in this weird news, we tell that a giant snail sighting has forced a local administrative unit – South Florida County in the US into quarantine.

According to the news on wsls.com captioned: ‘’ Invasive, giant snail sighting forces South Florida county into quarantine’’, One of the most damaging snails in the world was recently spotted in a Florida city by a master gardener on June 23 in the New Port Richey area, forcing a quarantine in part of the city, according to the Florida Department of Agriculture and Consumer Services.(FDACS)

The quarantine area spans nearly six miles and it doesn’t prohibit residents themselves from traveling, but it does prohibit any movement of plants, soil, compost or yard waste in the area without permission from the Florida Department of Agriculture. The FDACS’s Division of Plant Industry has already started treating the area with metaldehyde-based molluscicide, or snail bait and has informed residents to avoid getting in contact with them to avoid getting infected with meningitis.

The FDACS said the snails can grow up to 8 inches long, or about the size of a standard coffee mug also consume at least 500 different types of plants, posing a threat to Florida’s natural areas.

Although snails may seem harmless, these crawly creatures can pose a serious health risk to humans, as they carry the parasite rat lungworm, which can cause meningitis.

This is the third time they’ve become reacquainted with the state.

In a strange weird news, we report that a Mexican mayor has married an alligator dressed in a white gown as a bride.

The news reports on Business Insider was captioned: ‘’Mexican mayor marries alligator dressed as a bride in traditional prosperity ceremony and on Newsweek with the headline: ‘’ Mexico Mayor Weds Alligator Wearing White Wedding Dress in Strange Ritual, the mayor of a small Mexican town married an alligator dressed in a white gown as a bride in a traditional prosperity ceremony. The alligator involved in the ritual is believed to be a deity representing Mother Earth

The mayor of the town, Victor Hugo Sosa, who is of indigenous descent, wed a seven-year-old alligator that was clothed in a white wedding dress and other colourful attire with many local residents in attendance, Reuters reported.

The symbolic colourful ceremony took place in San Pedro Huamelula, a town located in the southwestern state of Oaxaca on Mexico’s Pacific Coast witnessed Sosa and other attendees danced to traditional music as the mayor held the reptile in his arms, kissing of the bride on the top of its snout.

The alligator marriage – blends indigenous traditions with elements of Catholicism, which takes place in San Pedro Huamelula every year, is thought to date back to pre-Hispanic times originating with the state’s Chontal and Huave indigenous communities.

The alligator is considered to be a deity that represents Mother Earth, while the marriage itself is believed to bring abundance to the town, which relies heavily on agriculture and fishing.

A woman has wowed Twitter social media for repeatedly aiming cow dung cakes on a wall, in a piece of weird news with the video going viral.

According to an NDTV.com news report, the video of which is going viral, titled: ‘’Watch: Woman Aims Cow Dung Cakes On Wall, Internet Says “Amazing”, the woman is seen masterfully throwing cow dung cakes high up on a wall, where they stick in a straight vertical line. Repeating the same step, she forms various vertical lines on the wall with the dung cakes.

The video is going viral on Twitter that shows a woman putting cow dung cakes on a wall for them to dry. Her talent of accuracy and perfection with which she places the cow dung cakes at the exact spot on the wall is being applauded by Twitter users.

The video, shared by IAS officer of Chhattisgarh Awanish Sharan, with the caption: “Indian Basket Ball team is searching for her.” has gained over 1.5 million views and more than 48,000 likes on Twitter.

Man converts the basement of his house into an eel pit, becomes famous on TikTok, Instagram, and YouTube

A man has converted the basement of his house into an eel pit, in one of our bizarre news going round, making him famous on TikTok, Instagram and YouTube.

According to a new report on upi.com with the caption: ‘’Underground eel pit turns Kentucky man into TikTok star’’, Nick Tobler a man from Kentucky, US, is becoming famous on TikTok after converting the basement of his house into an eel pond.

An animal-loving man said he was inspired to create the eel habitat when he and his brother moved into their grandmother’s old house in Taylor Mill and he inspected the home’s underground rain cistern, which was originally designed to store rainwater for conversion into fresh drinking water

Tobler said his TikTik account, @CowTurtle, spiked to hundreds of thousands of followers when he started filling the cistern — which he accesses via a hatch inside the house — with water, eels and goldfish.

Tobler said he currently has 11 or 12 American eels in the underground pond, in addition to a few dozen other pets inside the house, including tarantulas, a caiman, and an Australian lungfish.

An 86-year-old woman has been named as the world’s longest-serving flight attendant, in one of our latest interesting news.

The report said that the Guinness World Records confirmed.that lotngest-serving woman started working as a flight attendant in 1957 for Eastern Airlines and continues to this day at American Airlines without any lapse in employment, and that Nash is also the oldest currently serving flight attendant in the world.

Nash said that she has spent most of her career working on the New York-Boston-Washington shuttle because it allows her to return home at night to care for her son, who has disabilities.

Nash said that the job has changed considerably since the early days when she celebrated her 60th anniversary with the company in 2017.

Woman finds disgusting ‘mould’ growing in her car after not driving it for 3 weeks, gets shocked

In an unbelievably shocking piece of news, a woman says she has found disgusting ‘mould’ growing in her car after not driving it for 3 weeks which has shocked her.

According to the unexpected weird news report on timesnownews.com with the caption: ‘’ Woman finds disgusting ‘mould’ growing in her car after not driving it for 3 weeks, a woman was shocked when she discovered her car covered in mould after not having driven it for three weeks,

Jess Davis was shocked when she returned to her car after three weeks to see ‘mould’ covering on the steering wheel, gear stick and the seat of her Audi.

Jess Davis, 31, from Sydney, Australia, posted a video of the grim story on TikTok.

Could police officers entertain better than musicians? Watch a viral video on Indo-Tibetan border police officials move the Internet with a rendition of “Afreen Afreen” song, in this weird entertaining news.

A video is winning the hearts of people over social media which shows two officials from Indo-Tibetian Border Police (ITBP) performing a musical rendition of the famous Pakistani song, “Afreen Afreen.” as reported on ndtv.com with the caption: ‘’ Watch: Indo-Tibetan Border Police Officials Move Internet With Rendition Of “Afreen Afreen”

Users were moved by the performance and left heartfelt remarks on the video.

While sharing the video on Instagram, ITBP said in the caption, “Afreen Afreen… Constable Vikram Jeet Singh of ITBP sings. Constable A Neli strums the Guitar.”

In the video, one of the constables is seen strumming the guitar while the other is singing the song.

A man gets deported after 21 years of using 16 names to cheat Canadian welfare system, finds his way back to Canada

In this bizarre report, a man who was deported after 21 years of using 16 names to cheat the Canadian welfare system has found his way back to Canada as officials say they still don’t know who he is

According to the news report on with the headline: ‘’ ICYMI: Nigerian deported after 21 years of using 16 names to cheat Canadian welfare system finds way back to Canada, the Nigerian man who used an alias to get asylum in Canada 30 years ago and allegedly cheated the welfare system and committed fraud by using as many as 16 other names before exhausting all appeals and got deported in 2012, made his way back in February.

The report said that in February, Chris Osho Oko-Oboh – a.k.a. Andrew Ighiehon, James Aigbe, Friday Adun, Okojie Lugard and Marek Orszula among others – whose true identity is still unknown, according to court, returned to Canada from Nigeria with a “modified” travel document and made yet another asylum claim. It was his fifth over the past three decades.

According to the Federal Court, Oko-Oboh first arrived in Canada on March 12, 1991, via the United States under the name of Andrew Ighiehon, and he was convicted of fraud of over $1,000 in Toronto less than four months later. In February 1992, he made a refugee claim under that name and was granted asylum in a month.

He was again convicted of fraud in 1993 and a deportation order was issued against him in 1997 based on “serious criminality,” said the court.

While he was fighting the revocation of his refugee protection status and subsequent removal, his rap sheet just got longer: attempted fraud, personation, uttering forged documents, false pretenses, possession of credit card, counterfeit mark, mischief, and assault. He was deported with the escort of border agents to Nigeria in February 2012.

“During his 21-year tenure in Canada, the respondent committed multiple crimes, for which the fraudster was convicted. The respondent’s refugee status was revoked in 2007. He was deported in 2012,” the court said.

This time, the man, believed to be 63 now, was immediately nabbed by border-enforcement agents upon arrival in Montreal through fingerprint matching. He has remained in detention.