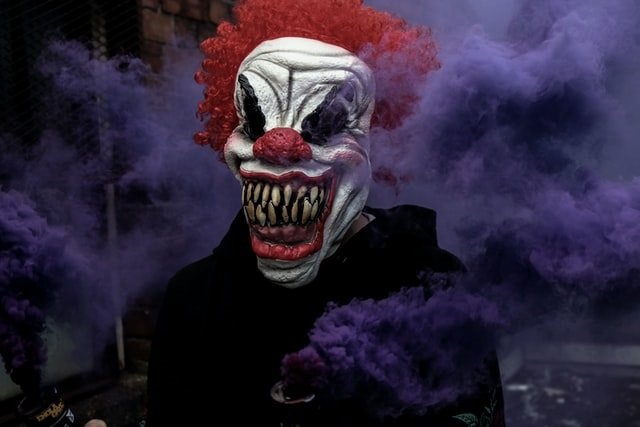 Photo by Tom Roberts on Unsplash

In incredibly upsetting news, a strange woman has attacked and berated a couple after picking an offense in their film and the weird incident has been filmed on the couple’s twitch stream.

According to a news report from Daily Star captioned: ‘’Woman in Michael Myers serial killer mask filmed attacking streaming couple’’, a couple filming and documenting their trip to Bouna Vista, Singapore on Twitch at Clarence Kang and Angie Mendoza.

While the streaming was ongoing, a Michael Myers serial killer mask-wearing strange woman approached them and began behaving incredibly aggressive – following their every move, chirping and singing madly, shouting at them to switch off their camera, and even kicking their food, frightened the couple. Michael Myers is famously the name of the serial killer in the Halloween films so the woman’s appearance raised a few eyebrows.

The bizarre incident, a terrifying moment, was filmed by the couple.

A woman who made a strict set of rules considered ‘insane’ for a pet dog sitter has been slammed by internet users as weird and unbecoming.

In the news on nzherald.co.nz captioned: ‘’Woman’s ‘insane’ list of rules for a dog sitter who must sign contract slammed as people think she’s trying to scam the dog sitter, the woman who owns the dog went to the next level and posted an “insane” and strict set of rules of 11 demands for looking after her dog Zero, and it hasn’t gone down well with internet users.

She also wanted to make sure all of the requirements would be met, including the pet dog sitter be “held liable if anything happened to Zero or our home and belongings, by demanding the dog sitter “sign a written agreement”.

Commenting on the weird report, internet users saw the list of rules as ‘insane’ and felt the woman wanted to scam the prospective pet dog sitter.

In this bizarre report, a broke woman who wanted strangers to sponsor her dog’s gorgeous birthday party has become frustrated for getting less than the amount she budgeted to take care of the party.

According to the worldnews.net report titled: ‘’ Women demand £ 200 from strangers for a dog party and get frustrated when less is sent, a woman who wanted to throw a memorable party to her dog logged on to a “generous group” on Facebook and rather than appreciate their generosity, she rebuffed the group members for giving her less, 55 pounds rather than the 200 pounds she requested.

She claimed to have financial difficulties since COVID as she has been suffering from ‘19Pandemic hit’.

In this weird and heartbreaking story, a woman has poured her husband boiled water while sleeping because she has alleged the man was dreaming of another woman.

According to Oddity Central news with the heading: ‘’Wife Throws Boiling Water on Sleeping Husband Because He Was Dreaming of Another Woman’’, the woman testified that she threw boiled water on her 45-year-old husband’s genitals when he was sleeping alleging that the man was declaring his love to another woman in his sleep. The incredible bizarre incident happened in La Paz, Bolivia.

The Enraged woman went into the kitchen, brought a pot of water to a boil, and then simply threw it on his genital area for his “transgression”, as the report had it.

According to police sources, the man was hospitalized with second-degree burns on his privates as well as on his arm and back.

Juan José Donaire, deputy director of the Special Crime Fighting Force in La Paz, said that this wasn’t the first time the man had suffered abuse from his wife. In a previous feat of rage, the woman had reportedly doused him in alcohol and tried to set him on fire.

A suspected ‘Dead body’ which was floating in a dirty canal turned out to be a meditating old man.

In one of the latest weird news report, according to Oddity Central news headed: ‘’’Dead body’ floating in canal turns out to be old man meditating’’, residents of Bangkok, Thailand were shocked to find that supposedly stiff dead body they saw floating in a dirty water canal turned out not to be a corpse, but a meditating person.

Amidst confirmation request by witnesses who gathered on the banks of the canal to determine the man’s health status, a brave young man descended into the dirty water, navigated through the garbage and the mud on the bottom, and when he touched the body, the motionless meditating old man sprung to life and a health check-up carried out found that he was in good health.

In this unbelievably interesting news, you will watch the video of a talented scissors artist making an amazing paper artwork leaving a woman surprised.

According to NDTV on the post captioned: ‘’ Watch: Scissor Artist Surprises Woman With Amazing Artwork’’, an artist names Karl Johnson was seen in the video making a beautiful gift for a stranger. Karl Johnson sat at a place where a musical rehearsal for children was going on and a stranger woman was seen sitting at a distance away from him on a chair while the talented artist finished the artwork.

Karl Johnson, America’s leading silhouette artist, used a paper to make a figure of the artwork during the rehearsal without letting the woman know what he was doing – an amazing artwork that left the woman surprised and thankful.

The video of the talented scissors artist surprising a woman in a waiting area of a music school with his amazing scissors has been going viral on social media.

The video was shared by ViralHog on Twitter but has since received over 420,000 views

In this bizarre news that might appear to animal lovers as ‘’the measure you used for others would be used for you’’, a trophy hunter who killed many wild animals shot dead by unknown assailants

In the news post on timesnonews.com with the headline:’’ South African trophy hunter shot dead by unknown assailants and on ndtv.com titled:’’ Trophy Hunter Who Killed Many Wild Animals Shot Dead, a man who hunted endangered animals and posted images of himself next to their carcasses on social media was shot dead in South Africa.

According to the posts shared on his Instagram profile Pro Hunter Africa, Mr. Naude killed many wild animals, took photographs with them, and posted them on his social media sites.

In Limpopo Province, the 55-year-old Riaan Naude had just gotten out of his car, and stopped due to overheating, when another car pulled up in the area. Two men got out of this other car and shot at Naude until he was dead. The suspected unknown assailants also reportedly stole one of his firearms after killing him, according to the local report.

It was not immediately clear whether he was killed for promoting trophy hunting, which is still legal in Africa and is a lucrative business. The business charges $350 per day to hunt game, $2,500 for crocodile,s and $1,500 for a giraffe, according to Pro Hunt Africa’s price list.

Officers discovered a pair of hunting guns, clothing, water, whisky, and pajamas from the scene of the crime, according to local media reports.

A man dressed in Zomato t-shirt, an online company, has delivered his resume in boxes of pineapple pastries to a couple of start-ups in Bengaluru, in this weird news report. His founding a unique way to get the attention of employers has impressed many social media Twitter and Linkedin users

According to the post on economictimes.indiatimes.com captioned’’ Bengaluru man dresses as Zomato agent to deliver his résumé in pastry boxes to start-ups, receives job offers on LinkedIn, and on ndtv.com captioned: ‘’ Bengaluru Man, Wearing Zomato T-Shirt, Delivers Resume In Pastry Box’’, , Aman Khandelwal, delivered his resume in a box of pineapple pastries to a couple of start-ups in Bengaluru dressed as a Zomato executive because he felt most resumes end up in the trash.

Mr. Khandelwal, who has completed his MBA from the Institute of Management Development and Research (IMDR), Pune, is looking for a management trainee position or APM (an internship in Product Management) role.

In a picture shared by him, the delivery box containing pastries had a note inside it which read: “Most of the resumes end up in the trash but mine in your belly.”