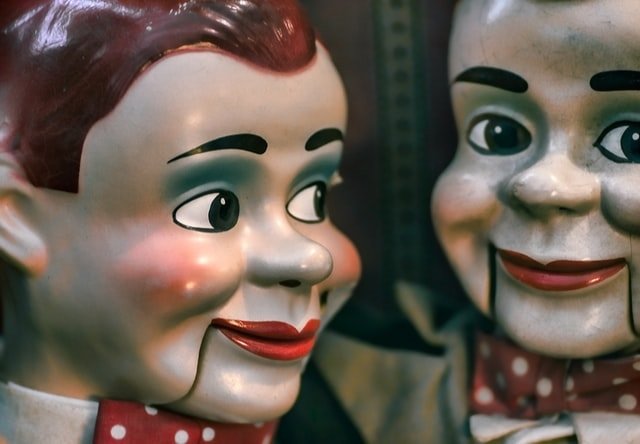 Contents hide
1 Video: Iran plotting to assassinate Donald Trump – a leaked Intelligence report reveals
2 Top 8 unbelievable, bizarre, strange, weird, scary, and interesting real stories and news of 22nd July 2022 – Videos and Photos
3 Photos: Concern over young people drinking soaked flavoured condoms in water to get high
4 Photos: Couple forces wedding guests to unusually wear puppets in place of bringing wedding gifts for the wedding ceremony
5 Photos: Doctor who refused to stop abortion in his hospital shot in the head during a church service.
6 Video: A female walrus is sinking boats and causing mayhem
7 Photo: Man who wants to keep the promise of going everywhere with his wife goes on vacation with her face pillow after she cancelled the vacation holiday plan
8 Dad is suing a food stall as he hasn’t stopped farting since eating a ham sandwich five years ago
9 Video: wild hamster poses for photographs in a delightful way leaving social media users in disbelief

Photo by Robert Zunikoff on Unsplash

Hello amiable reader and viewers, welcome to our Eduonwheels blog for today this Saturday, July 23, 2022, where we’ll bring you all the latest reports on weird, unbelievable, strange, bizarre, odd, scary, mysterious, incredible, horrifying, terrifying, terrific, unusual, funny, unexpected, exciting and interesting news and stories on things and happening around the world in the most entertaining way.

As is always the expected case, in our latest weird news blog for today, the daily updates in posts will follow below in the collection of the most recent of the weirdest news for this day, Saturday, July 23, 2022, reported below in no particular order.

Young people in the Durgapur will leave them in water for several hours before drinking the water, which gets them high for around 10 to 12 hours.

In this weird trending report, young people in Durgapur, India are getting addicted to the solution of condoms in water by drinking flavoured condoms-soaked water for hours to get high.

According to one of the newest bizarre news on dailystar.co.uk with the caption: ‘’ Strange Addiction: Youth of West Bengal’s Durgapur is ‘High’ on Condoms and Locals are Baffled ‘’, young people in Durgapur, India are soaking flavoured-condom in water for hours before drinking the solution and getting a 10 to 12-hour high which not only skyrocketing the prices of flavoured condoms but getting the officials in Durgapur, a city in the Indian province of West Bengal, are concerned, even following a surge in demand for condoms.

Daily Star in citing News18 Bangla quoted an official as explaining that strangely soaking flavoured condoms in hot water releases an aromatic compound that breaks down to form alcohol which gets them intoxicated.

A couple who met in a puppetry class as students set to tie the knot has already infuriated their wedding guests after insisting they bring expensive puppets in lieu of gifts to their puppet-themed ceremony, in one of the newest trending weird news posts on social media Reddit.

Taking to Reddit, the theatrical groom – who goes by the username u/puppetAH123 – wrote: “We also want everyone to ‘wear’ their puppets during the entire wedding and reception.

The bride and groom have invited their troop of fellow puppeteers to their wedding, and even want the ceremony to be officiated by puppets, believing this will “make for incredible pictures.”

The strange bizarre news is reported with the headline: ‘’ Couple spark fury after asking wedding guests to buy £125 puppets to wear all day instead of bringing the usual wedding gifts ‘’

Photos: Doctor who refused to stop abortion in his hospital shot in the head during a church service.

In this bizarre news post of today, we report how a medical doctor who refused to stop abortion in his hospital shot in the head during a church service

By 2009, after more than 40 years of medical practice, Dr. George Tiller had a national reputation. He was the director of one of just three abortion clinics in the United States that provided women with late-term abortions — and he had become the target of pro-life activists.

Anti-abortion activists spent years trying to shut down Dr. George Tiller’s clinic, which was one of the only places in the nation that provided late-term abortions — until one extremist shot him in the head while he was at service church in 2009 while handing out bulletins.

For decades, those who disagreed with the procedures his practice provided tried to have his clinic closed. Eventually, some protesters strangely resorted to violence in order to fulfill that goal. Tiller survived at least two attacks on his life before one anti-abortion extremist Scott Roeder sadly murdered him on May 31, 2009.

The weird news report was captioned: ‘’ The Life And Death Of George Tiller, The Abortion Provider Who Was Murdered Because He Refused To Close His Clinic ‘’

Video: A female walrus is sinking boats and causing mayhem

A female walrus, known as Freya who quickly became an international icon has suddenly turned into a threat to life in a strange turn around sinking boats and causing mayhem in Oslo Norway, according to one of the newest weird reports of today, Saturday, July 23, 2022, shared on video.

The strange reports which are attracting the attention of the public, media agencies, and social media users claimed that the incidents have been a problem for boats that are “not walrus-worthy,” as German broadcaster Deutsche Welle put it in a video shot back in June, highlighting some of Freya’s finer moments in the town of Kragerø, where she spent some time earlier this summer.

Freya also weirdly continues to pick up fans from afar, with many people celebrating and rooting for her on social media platforms.

This latest bizarre news post on troublesome walrus was captioned: ‘’ A Walrus Named Freya Is Sinking Boats And Causing Mayhem In Norway ‘’

Photo: Man who wants to keep the promise of going everywhere with his wife goes on vacation with her face pillow after she cancelled the vacation holiday plan

A Philippines man goes on vacation with his wife’s face pillow to keep the promise of going everywhere with his wife, leaving social media users in splits of comments, in one of today’s latest weird news posts.

Raymond Fortunado shared photos of the vacation, in which he could be seen doing all sorts of touristy things with his wife’s meme-face pillow.

A Filipino man bizarrely came up with a unique idea to ensure his wife could still be on vacation with him even though she had to cancel their holiday plans at the last moment. Raymond Fortunado had long planned a vacation to Coron in Palawan, the Philippines. However, at the last minute, his wife Joanne Fortunado – a freelance model – had to cancel the plans, as per media outlet Kami.

But to ensure that his promise of going everywhere with his partner remained unbroken, Mr. Raymond strangely took a meme-face pillow of his wife on the holiday. Taking to the social media Facebook, Mr. Raymond shared a series of photos of the “romantic” vacation, in which he could be seen doing all sorts of touristy things with his wife’s meme-face pillow.

Since being shared online, Mr. Raymond’s post has taken internet users by storm. The images have prompted several users to express their views.

A dad suing a food stall for £200,000 as he claims he unusually hasn’t stopped farting since eating a ham sandwich five years ago.

Tyrone Prades claims he was bedridden for five weeks with salmonella after eating a ham sandwich at Birmingham Christmas market, and that he’s had uncontrollable strange flatulence and keeps farting since embarrassing him in public and waking him up at night..

Tyrone Prades, 46, bought the sandwich in December 2017 during a visit to the Birmingham Christmas market with his wife and kids.

The lawyers of Robert Parkin added that Prades’ stomach unusually continued to make awkward rumbling noises after the illness subsided and has had regular and uncontrollable flatulence ever since, embarrassing him in public and waking him up at night.

The odd news post was reported with the caption: ‘’ Man who ‘hasn’t stopped farting for five years’ sues food stall for £200k over ham roll ‘’

The trending new video of a wild hamster for a photograph in a delightful way leaves internet and social media users in disbelief, in one of today’s weirdest stories.

Shared by Buitengebieden on Twitter on Friday, the caption reads, “Have you ever seen a wild hamster doing a photoshoot?” The video has been credited to Julian Rad, a wild photographer.

The 22-second bizarre video begins with a photographer holding a camera when a hamster pops its head out of the ground. The photographer is seen strangely offering a beautiful flower to the animal. The hamster then comes out from the ground covered with grass and attempts to eat the flower.

The photographer keeps a hold of the beautiful flower being nibbled by the hamster to distract and starts taking shots of the animal.

Shared by Buitengebieden on Twitter on Friday, the caption reads, “Have you ever seen a wild hamster doing a photoshoot?” The video has been credited to Julian Rad, a wild photographer.

The strange behaviour of pet and wild animals are quite appealing to watch. A video showing a wild hamster posing for photographs is winning hearts on social media among internet users.

Since being shared, the video has amassed over 4 million views and more than 170,000 in just one day. Twitter users have shared the post over 21,000 times likes so far.

Video: How a fast-thinking man prevented a girl from hitting a pole as social media Reddit users shower praises.

A man spotted a girl riding a bicycle at a high speed and jumped to grab her, preventing what could have been a fatal accident that could have resulted in her death or sustaining a fatal injury, according to one of our latest weird news posts.

A man is being praised on social media Reddit for saving a girl on a bicycle from hitting a pole on the street.

The new trending bizarre video shows the man in a blue t-shirt and on a bicycle talking to his friends on the pavement near the road. He suddenly turns around his head, appearing to her something.

His unbelievably quick-thinking man saved the youngster in the nick of time from what could have been a fatal accident in the incidence – the video of which is trending on the internet and social media platforms, with users calling him a saviour and equating him with Jesus Christ. The location where the video has been shot is not known. On Reddit alone, it has received more than 82,000 votes.