How we will have the information network split across the world

Social media technology companies like Facebook, Google, and Twitter are facing increasing stand-offs with national and regional governments that could result in global internet blockage and ban or at least split. Facebook had hinted at the likelihood of similar clashes in the future. The cracks could be seen to be getting deeper. So, the openness to launching products and services globally, apart from China and North Korea, Facebook, Google, Twitter, Apple, and other technology platforms enjoy with little pushback, prior to this time may no longer be a given.

The future of our internet worldwide wide has been looking bleak for a couple of months now and the new trend is drifting towards information split across national and regional borders.

If the world fails to find a way to reconcile the way internet web access works taking care of the difference in geographical barriers, and Facebook, Google, Twitter, Apple, among others, rather than assuming the reliable position of the global technology industry playbook threaten to pull its products out of markets in the face of unfavourable regulation, I am afraid our internet worldwide web services will be on the verge of collapsing and then getting fragmented.

The implication is that countries would only be allowed internet access to online contents due to their nation or region, and web access outside their territories restricted.

These social media companies are ultimately dependent on continued access to billions of users around the world, and national and regional governments including the US, UK, India, and China have shown they are willing to cut off that internet web access in the name of protecting their citizens and autonomy.

1. Unfavourable regulations and control due to local laws

There is now increasing nationalism, trade disputes, and concerns about the market dominance of certain global social media technology companies.

European Parliament passed a law two years ago that will make social media technology companies liable for uploaded content that violates the copyright. The legislature followed a tough privacy law, the General Data Protection Regulation (GDPR), and the Network Enforcement Act (NEA) – an online hate speech law in Germany, both of which took effect in 2018. In the same years, Australia’s Parliament passed legislation that could imprison the executives of social media technology companies if their platforms stream real violence.

Again, Europe is floating another regulation that could impose temporary bans on US technology companies that violate its laws.

In 2014, Google’s Alphabet Inc.(GOOGL) shut down its Google News service in Spain after the country passed a social media law similar to the one Australia passed before eventually giving in and signing deals with some of the country’s top publishers.

2. Looming blockage and the impending ban of social media technology companies by national and regional governments 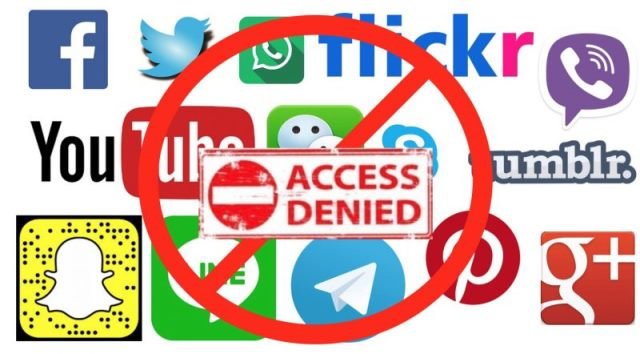 At one end of the array is China, where the world’s most sophisticated system of internet censorship (The great Chinese Firewall) stifles almost all political debate along with misinformation, hate speech and pornography — but without preventing the rise of local technology companies making profits.

Blocking and banning is increasingly becoming part of growing efforts to clamp down on social media platforms national governments believe to play a major role in intensifying conflict. Social media platforms especially Facebook, Google, and Twitter face impending blockage and ban. The threat is real and can hamper the global worldwide web services being enjoyed today if activated.

The most recent is Russian communications authorities, Roskomnadzor, threat to slow down contents on Twitter – the speed of uploading photos and videos to Twitter over its failure to remove banned content – content they said were encouraging suicide among children and containing information about drugs and child pornography. The agency also threatened to block Twitter completely if it refuses to abide by Russian law.

And now the Indian government appears to be leading the regulatory implementation and enforcement in policing online social media content. Its recent Rule 5(3) of the Information Technology (Guidelines For Intermediaries And Digital Media Ethics Code) Rules, 2021, requires significant messaging platforms to trace and identify a subscriber who is a ‘first originator’ of the information in form of social media message or post. Internet www is in danger of fragmentation if other world leaders follow the footsteps of the hard-line approach of Germany, Australia, and  India and other countries.

As recent events have shown, a platform doesn’t need to be banned or shut down outright for that fragmentation to happen. In response to Australia’s effort to make it pay publishers, When Facebook stopped showing links from news outlets to its Australian users, users outside the country could also no longer access content from Australian news outlets. Even though an agreement was reached, the legislative control still remains in place.

The United States was on the verge of banning TikTok and WeChat, though the new Joe Biden administration is rethinking that move, we are unsure whether the ban will be sustained or not.

The news on the outcome of the Twitter-India impasse is undue but the world watches keenly as the will unfold soon. The Indian government had ordered Twitter to flag accounts that they believed originated offensive messages and escalated violence following the recent Indian farmers’ protests over new unfavourable agricultural policy. Twitter’s partial compliance to the order due to its support in keeping with the principles of defending protected speech and freedom of expression is viewed by the Indian government as an act of violation of Indian integrity.

With not less than 700 million www users, India is a huge and important market for global social media technology companies, although an increasingly precarious one as the government led by Prime Minister Narendra Modi seeks to tighten its grip on the internet and social media.

The Narendra Modi-led government has previously clashed with Facebook and WhatsApp and It also banned TikTok and dozens of other apps last year after political strains with China worsened, and it has resorted to shutting down the internet altogether in several parts of the country to curb the protests.

The consequences of having fragmented internet worldwide web services

If that increased fragmentation of www is allowed to reach its natural conclusion, however, the consequences could be horrible and calamitous.

If the world finally settles for the outcome in which every major country or region or market maintains its separate social media platforms then what we will have is a completely split information network across the globe which portends that citizen of a country or market operators citizenry will have completely different sets of information about local events, about world events, content knowledge and perhaps a very splintered and disintegrated worldview of reality.

This blog content on ‘How we will have the information network split across the world: 3 reasons our internet’s world wide web (www) will end soon from global weblink cut off if Social media technology companies like Facebook, Google, and Twitter continue to face unfavourable regulation, blockage and ban’  is categorized under Information and Communication Technology Education News.

Our Information Technology Education system is about creating and delivering impacting, and empowering problem-solving information technology and enhancing effective communication skills to our amiable readers for better livelihood – Eduonwheels.