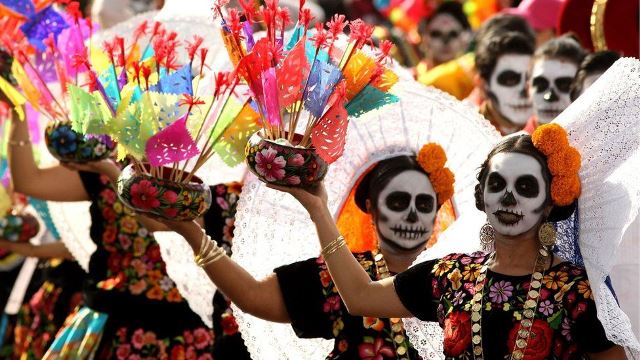 Contents hide
1 22 Stunning Photos of Mexicans celebration of the ‘Day of the Dead’
2 Return of mass memorials for the ‘Day of the Dead’ shows tradition refuses to die
3 Decorating graves, which are covered with orange marigolds, lighting candles, putting out offerings of the favourite foods and beverages, parades, and costume parties for deceased relatives were observed
4 People visit the graves of dead relatives and friends without mourning
5 Homes, schools, and public alters for the dead
6 Skeleton walking among the living parades

Mexico returned Sunday to mass memorials of the ‘Day of the Dead’ after traditional visits to graveyards were prohibited last year due to the COVID-19 pandemic. The Mexican holiday, also known as Day of the Dead, extends over the first two days of November and has nothing to do with Halloween. It’s an ode to the afterlife, honouring death as a part of life and a reminder that death is nothing to be afraid of.

But the one-year break showed how the tradition itself refuses to die: Most families still celebrated with home altars to deceased loved ones, and some snitched into cemeteries nonetheless, even though cemeteries in Mexico were closed to visitors last year to avoid spreading the virus – so strong is the tradition.

Mexico has long had a different attitude toward death, more social, more accepting than in many parts of the world

But Mexico has long been more social and tolerant of death than many parts of the world. Remembrance ceremonies and funerals here are often complex, full-day events that bring the whole neighbourhood and extended family together for food, prayer, and remembrance.

Decorating graves, which are covered with orange marigolds, lighting candles, putting out offerings of the favourite foods and beverages, parades, and costume parties for deceased relatives were observed

Memorable dates include cleaning the entire family and decorating the tomb covered with orange marigolds. In cemeteries and home altars, relatives light candles and offer food and drinks loved by deceased relatives. Families are spreading bulks of marigold petals, lighting up candles for their loved ones and some are even wearing colourful skull makeup.

In the center of Mexico City, there was a special altar for those who died of COVID-19. Relatives could enter the fenced area and were provided with equipment to print photos of loved ones.

This was a quiet and solemn memory in a country where death from coronavirus has affected almost every large family.

For most, it was a joyful return, above all, to public activities like public altars and the Hollywood-style Day of the Dead parade that Mexico City adopted to mimic a fictitious march in the 2015 James Bond movie “Spectre.”

Tens of thousands of Mexico City — almost all wearing masks, despite the city’s relatively high vaccination rate — gathered along the city’s main boulevard Sunday to watch the parade of dancing skeletons, dancers, and floats.

There were few references to coronavirus in the parade, but there was a whole section of skeleton-dressed actors representing Mexico City’s street traders and vendors.

More risky group activities like Halloween-style costume parties and trick-or-treating have still not recovered from the pandemic. But children took the opportunity to dress up in Mexico-style Day of the Dead costumes as skull-like Catrinas, or as red-clad guards from the Netflix series “Squid Game.”

The University of Alabama – Homecoming 2021: “Together We Rise”.

People visit the graves of dead relatives and friends without mourning

During the holidays, Mexicans flock to the cemetery and visit the graves of dead relatives and friends. But they do not grieve and do not grieve empty-handed. After cleaning tombs and tombstones, some decorate them with flowers, calendula petals and candles. Some come quietly to pray, while others sing mariachi to their lost loved ones.

People go to the grave every year to preserve the memory of the dead in their hearts and in the hearts of their families. They talk, drink, and eat together as if it were a party.

Homes, schools, and public alters for the dead

Colourful, multi-layered monuments have been erected in homes, schools, and public places to pay tribute to deceased loved ones. Different levels represent the underworld, earth, and sky. A large photograph of the deceased is usually placed at the top of the altar with a papel picado. The altar features sugar skulls, candles, pan de muerto (dead man’s bread), and Mexican marigolds. The intense fragrance and vivid colours of fresh calendula petals lead the soul to the altar, and a glass of water is useful to quench the thirst of the dead after a long journey. The orendas (tributes), called the altars, are meticulously assembled using many traditional elements, but each is unique which can be personalized with the deceased’s favourite food, living souvenirs, and favourite objects. Some of the altars display books, pieces of jewellery, music and clothing.

Skeleton walking among the living parades

People take to the streets to celebrate De los Muertos Day with beautiful skulls painted on their faces and costumes.

Women usually wear elegant dresses and hats with painted faces and adorned with feathers and flowers. In fact, they resemble La Catrina, a wealthy skeleton woman wearing a colorful floral hat. Painted in 1910 by Mexican artist José Guadalupe Posada, this image was a political satire mocking the negative attitudes toward Mexican upper classes and indigenous peoples.

Crowds dance in daytime gay parades in many cities or parade together on their way to the cemetery on Halloween night.