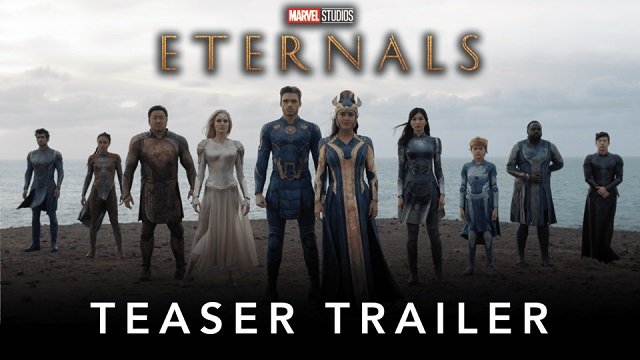 Contents hide
1 ‘Eternal’ Reviews: Exciting, giving what you may not have watched before but short of breezy fun of MCU’s best movies
2 About MCU’s Movie ‘Eternal’ Final Trailer
3 Angelina Jolie pictured alongside her teenage daughters at ‘Eternals’ premiere
4 ‘Eternal’ Interviews: ” Are you like Doctor Strange, Trailer?”
5 The female stars of Marvel’s “Eternals” pulled out from Elle magazine’s 2021 Women in Hollywood Celebration due to possible COVID exposure
6 Harry Styles is reported to be joining the MCU as Eros, Thanos’ brother in “Eternals”.
7 ‘Eternals’ movie, boasting a diverse cast and Marvel’s first deaf role, premieres
7.1 Actors Angelina Jolie and Salma Hayek brought Hollywood glamor to the world premiere of Marvel Studios’ latest comic book adaptation, “Eternals”,
8 Watch video: World Premiere | Marvel Studios’ Eternals featuring Actors Angelina Jolie and Salma Hayek
9 2.5 hrs or more Eternals becomes the second-longest in the Marvel Cinematic Universe (MCU) Movie After Avengers: Endgame
10 Director and screenwriter Chloé Zhao revealed Eternals will be the second longest-running film in the Marvel Cinematic Universe (MCU)
11 MCU Movies don’t usually run more than 150 minutes
12 Why is Eternals over two-and-a-half hours?
13 The 10 Characters and the Celestials in Eternals
14 What happens in the film will have huge implications on the future

‘Eternal’ Reviews: Exciting, giving what you may not have watched before but short of breezy fun of MCU’s best movies

The Guardian gave Eternals two stars, calling it “magic hour meets PowerPoint”. The paper’s critic Steve Rose said that “there’s just too much going on: it’s all headed towards yet another ‘race against time to stop the really bad thing happening’ climax”.

According to Forbes, Eternals always seemed like a bit of a risk, as even with an A-list cast, they weren’t exactly the most exciting or interesting characters to adapt into a film for the MCU.

With 41 reviews, it’s sitting at 71% on Rotten Tomatoes. Fine for a normal film, very low for an MCU film, makes it the third-lowest MCU film of all time out of 26 total, and generally speaking, the more reviews come in, the further these kinds of scores tend to drop.

Eternals focusing on relatively unknown heroes isn’t really an excuse for the low score. Both Shang-Chi and Guardians of the Galaxy are inside the top 10, and at the time, both were very unknown by general audiences.

Eternals is about the titular group of 10 gods who join forces to protect  Earth from “Perverts”.

In his review,  Kevin Maher of the Times also selected two stars, stating that the film is a story of “navel-looking superheroes looking for a decent script.”

He wrote: “There is a strange self-sabotaging energy at the heart of this  blockbuster.”

Maher noted, however, how the film attempted to show a more diverse mix of superheroes on screen.

It is the first major studio film by Chloé Zhao, who won the best director Oscar earlier this year for Nomadland.

Angelina Jolie pictured alongside her teenage daughters at ‘Eternals’ premiere

Angelia Jolie and her teenage daughters (Children) Zahara and Shiloh put on a glamorous display on the red carpet last night.

Angelina Jolie arrived in style at the premiere of her new film “Eternals” and had some of her beloved family in tow. Five of her 46-year-old kids joined her on the red carpet and some of their outfits might look familiar! Angelina, Maddox, Vivienne, Shiloh, Knox, and Zahara.

Mumofsix, who plays Thena in the film, joined her daughters, Zahara, 16, and Shiloh, 15, for the lavish event.

It came days after the star-studded world premiere in Los Angeles, which they both attended along with other siblings.

On the red carpet, Zahara smiles into the camera in a long white dress with gold straps, complimenting her mother’s metallic number.

Meanwhile, Shiloh opted for a little black dress and added a pop of color with a pair of bright yellow sneakers.

Read on from Express

Watch video: The cast of Marvel Entertainment Studios’ Eternals play the game “Choose For Eternity” and experience the film only in theaters on November 5.

NBC News confirmed that The female stars of Marvel’s “Eternals” pulled out from Elle magazine’s 2021 Women in Hollywood Celebration on Tuesday evening “due to a potential COVID exposure,”

Elle magazine said in a statement that the actors, Angelina Jolie, Gemma Chan, Lauren Ridloff, and Salma Hayek, canceled their appearances “out of an abundance of caution,”

Editor-in-Chief Nina Garcia made the announcement Tuesday at the magazine’s 27th annual event at the Academy of Museum of Motion Pictures in Los Angeles and while emphasizing on sticking to the rules of the reality of our new world, she was deeply grateful to make the appearnce that onight in person.

Harry Styles is reported to be joining the MCU as Eros, Thanos’ brother in “Eternals”.

Harry Styles is reported to be joining the MCU as Eros, Thanos’ brother in “Eternals”.

The “Sugar Watermelon” singer is a surprise addition to the franchise and viewers who caught a glimpse of the film saw it in a post-credits scene after it premiered at Hollywood’s El Capitan Theater this week.

The big revelation from #TheEternals premiere Harry Styles has joined the MCU as Eros, Thanos’ brother.

Eros, according to Marvel, is capable of controlling people’s emotions and psychic pleasure centers.

Styles, who is currently on the “Love on Tour” tour, will also star in Olivia Wilde’s “Don’t Worry Darling”, slated for 2022.

Directed by Chloe Zhao, who won the best director and best picture for the film “Nomadland” at the Oscars earlier this year, “Eternals” boasts one of the most diverse casts of any Marvel movie.

“I hope it just starts to normalize what should have been there in the first place,” Jolie told Reuters. “I hope people watch these films in years to come and we don’t even think about it as being diverse, it just becomes what’s normal and what’s right, and what’s an appropriate representation of the world we live in.”

Eternals will be the second longest-running film in the Marvel Cinematic Universe, director and screenwriter Chloé Zhao revealed. While we don’t have exact showtimes yet, it does give us stadium numbers. In a new interview, the 39-year-old Chinese-American director confirmed that Eternals will last just over two and a half hours. This will make Eternals the second, longer MCU chapter. After all, only one chapter of the MCU lasts more than two and a half hours – it’s called Avengers: Endgame and has hit the three-hour mark. Avengers: Infinity War came very close, at 149 minutes.

Eternals is completely standalone, with Zhao noting that all viewers need to know is the plot of Infinity War and Endgame: “half the universe disappears and [then] comes back’’

Why is Eternals over two-and-a-half hours?

Chloe Zhao said that Eternals runs over two-and-a-half hours and probably more because it’s ten characters, the Celestials, and 7,000 years, and there’s a lot going on.

The 10 Characters and the Celestials in Eternals

Who are these 10 characters in Eternals?

Eternals follows the titular immortal beings who were created by the Celestials — we met one Celestial in StarLord`s father Ego in Guardians of the Galaxy Vol. 2 — and draw their superpowers from cosmic energy. They have been living secretly on Earth for over 7,000 years. There`s Gemma Chan as the empathetic Sersi, Richard Madden as Ikaris who can fly and shoot beams out of his eyes, Kumail Nanjiani as Kingo who can shoot projectiles out of his hands and is living as a famous Bollywood star, Lia McHugh as Sprite who can conjure illusions, and Brian Tyree Henry as weapons and tech inventor Phastos who`s the first gay MCU superhero. We also have Lauren Ridloff as superfast Makkari who is the first deaf superhero from the MCU, Barry Keoghan as the mind manipulator Druig, Don Lee as Gilgamesh – the strongest of the Eternals, Salma Hayek as spiritual leader of the healing Immortals, and Angelina Jolie as Thena’s elite warrior who can make all kinds of weapons from cosmic.

Chloe Zhao said that what happens in this film will have huge implications on the future.

Marvel Studios president Kevin Feige has claimed that Eternals will redefine the MCU. To that, Zhao said: “I think a big part of it is that audiences will be discovering the origin of the MCU through the mythology of the Celestials. I think by the end of the film, we will have a new understanding of planet Earth`s relationship with the cosmos, and also with its own inhabitants. But in that sense, it would have a huge effect on the future of the MCU.”

Everything To Know About Scream 5 Movie – The Newly Released Thriller

This blog content on ‘2.5 hrs Eternals becomes the second-longest in the MCU Movie After Avengers: Endgame’  is categorized under Feminist Popularity and Influential Women and Artists in the World of Information Education