The Weakness in Applying Corrective Measures to School Shootings

1. Use of public mental health approach to domestic (family) violence and school shootings

Watch video on How to prevent school shootings

Information is key to empowerment. An uninformed society is made up of deformed people. There is dire need of global sustainable education system to ensure better life for the future generations.

– Europe has recorded 5 incidents – 2 in France, 1 each in Russia, Germany and Greece

The Weakness in Applying Corrective Measures to School Shootings

Applying corrective measures to contain a school shooter in an emergency  or lockdown classroom is more like ‘flogging a half-dead horse’ to me but going to the schools and communities to arm them with preventive resources has its backing on the research-based approach to violence prevention and response with unprecedented support from many academic professionals and experts in various fields of endeavour.

1. Use of public mental health approach to domestic (family) violence and school shootings

Many researchers believe the best way to dissuade abuse is to, firstly, stop people from becoming abusers. This is a problem area social and emotional learning in physical and health education seeks to address

Plentiful factors knit to lead an individual from showing violent behaviour up to shooting up in a school, the often deadly combination of domestic violence and easy access to guns should not be overlooked.

The school environment, affects students’ mental and emotional health and academic success. It defines the quality of relationships among the students and the staff in a school. It is affected by the school’s approach to discipline and behaviour, the availability of professionals like counsellors and social workers, as well as any social-emotional learning in the classroom. The role of acclimatization and nurturing of the school environment with healthy social and emotional behaviours and habits lies with the teaching staff, counsellors, psychiatrists, psychologists and social workers, both in the school and in the community.

Promoting desirable social and emotional behaviours will remove the major “environmental hazard” in a child’s mindset that contributes to domestic and gun violence. Applying such behavioural and habitual pattern in prevention of school shootings addresses both homicide and likely self-harm (suicide). Suicide is just behind homicide as a leading cause of death for teenagers in US.

It will also shut down bullying, discrimination and harassment in the school. In Canada, Chile, Israel, Kosovo and even US, kids and students who brought weapons to school had reported a lot of victimization and might have been hated and upset.

Encouraging whistleblowing kids to report any sight of weapon in school or held discussions, handwritten, drawn or online post hints from students about violent intentions known as threat assessment offers the chance to decelerate conflict before it begins.

In US, 20 to 30 per cent of students above the elementary level consistently report seeing a weapon of some kind at school at least once during the year.  Figuring out and assessment of a source of threat becomes easier when the idea is shared. Almost all students who committed homicide had told someone of their intentions.

By encouraging these whistleblowing students to speak up about potential violence threat and listening to them, we learn that there are many weapons on school grounds and students know about them. The students’ knowledge of weapons in their school is the rumbling before the earthquake.

Nikolas Cruz’s mass shooting at a Marjory Stoneman Douglas High School, Parkland, Florida US, might have been prevented if students and teachers were trained to identify and dislodge any intended gun attack after he had posted threatening messages on his Instagram account about killing himself and others. Similar strategy was used in Germany as a pilot program to leak planned students’ gun violent attack and within seven months of the program, at least 19 high-risk cases were identified across the country, and necessary help was offered to the students.

A threat assessment and response team which can consists of the principal, school counsellor, school psychologist and a school-based police officer can be set up to investigate a threat report. At each social level — friends, teachers, principals, parents, neighbours and law enforcement — there needs to be a response when an individual tells others of a plan to kill or harm, shows weapons, makes threats, has a method or has a target in mind. The threat assessment and response team talks to the people and any witnesses involved and try to figure out how serious the threat is in terms of target particularity, detailed plan of engagement, associated weaponry, etc.

The team will take precautionary measures and remedial actions to avert the intended catastrophe like protecting the envisioned victims, notifying parents, questioning, referrals to social and mental health officers, and the likes. The team should have the capacity to offer support and protection to whistleblowing students.

One other factor that will encourage witnesses reporting gun violence in school amidst the fears for their safety even if there is no constituted threat harassment and response team in the school – a situation where nothing will be likely done is strong students – teachers (school staff) relationship.

Dealing with obsession with firearms

Obsession with firearms is a warning signs of a potential threat. Many mass shooters in school shootings are obsessed with firearm arsenals prior to the shootings and mass murders.

Healthy social-emotional behaviours and habits in schools is a viable public health strategic tool to eliminate obsession with firearms.

The constitutional standing of the Second Amendment  in US should neither protect nor get in the way of regarding those who openly express obsessions with firearms arsenals and confess the willingness to kill others as exhibiting social-emotional misbehaviours and as such are dangerous to health.

Expressing a constitutional right of privacy of a citizen should not be detrimental to others’ lives. School professionals, public health workers and law enforcements agents should be properly guided.

Stringent background checks should not be limited to licensed firearms dealers as in US but should be universal  Anyone with a demonstrated record of criminal violence or misuse of guns or mental health issues who threatens others with gun or firearms should be prohibited from any form of gun possession and access to assault firearms.

In as much as cultivating healthy social-emotional behaviours will reduce the rate of disciplinary actions, schools should not hesitate to suspend or expel a students with gun violent or mass murder motive and recommend that full social and emotional learning be done for the student until he can be ascertained to be able to maintain satisfactory level of social-emotional behaviours suitable to ensure public health safety.

Such will deal with any psychological effect that student suffers due to the exclusionary practices.

Red flag laws colloquially known as Extreme Risk Protection Orders (ERPOs) in US allow family members and law enforcement agents to restrict or temporarily remove a person’s access to firearms by ordering the seizure of weapons when their behaviour suggests that they pose a violent threat to themselves and others.

I have taken my time on several occasions to observe children’s reactions as aftermath effect of seeing violent video games and action movies. They tend to practise what they see on media at homes, in the classroom, as the captivating imagery of the actions replay in the memory.

So, I quite agree with US President, Donald Trump who has tried to blame incidents like mass shootings by young perpetrators on violence in media despite lack of research evidence and US Supreme Court in 2011 against a law suit based on the assertion that violent video games promote real-life violence.

Banning violent video games is unlikely to happen in many modern societies but children learn more and better by what they see (Observational learning). The question is how could a mass shooter have perpetrated mass shooting well enough to kill a handful of persons when he hadn’t seen mass shootings anywhere in his life? 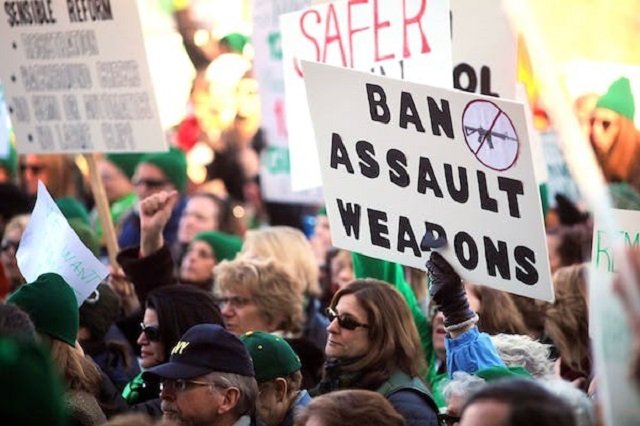 Citizens of a few countries of the world have constituted rights to keep and bear arms with certain proviso. Switzerland, Czech Republic and UK legalised the bearing of firearms with certain stipulations.  Two of the five countries that legalised bearing of assault weapons – US and Mexico have recorded the highest number of school shooting incidents from 1st January 2009 to 23rd May, 2018 – both totalling 296 incidents. 288 of those incidents came from US and it is the only country that legalised arm-bearing that does not include explicit restrictive conditions.

Many in US see banning assault weapons an appropriate first step to keeping the highly lethal weapons beyond reach for good and bad actors equally. It is to me the best preventive measure of school shootings internationally. It keeps the society safe even when every other preventive measure fails. In simple terms, ‘’You can’t use arms when you don’t have them.’’