How best to know your computer hardware

Computer Hardware and its Component Parts: How best to know your computer hardware. Photo credit: pixabay from pexel

What is a Computer Hardware?

The computer hardware accepts data, processes the data and gives out information as output in the computing system, and interconnects other components of the computer.

Component Parts of the Computer Hardware 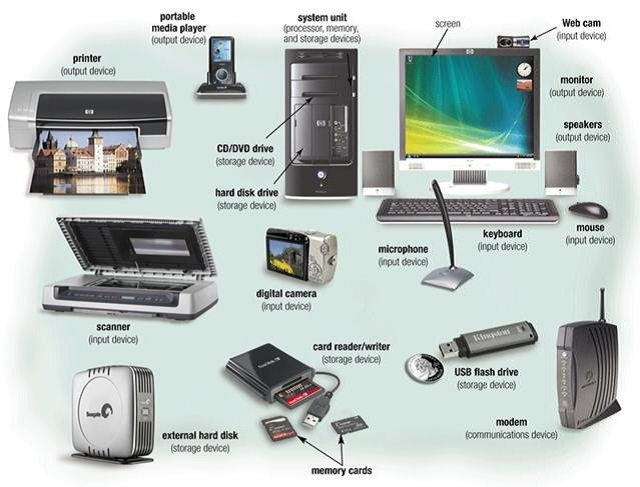 The System unit or the Computer cabinet 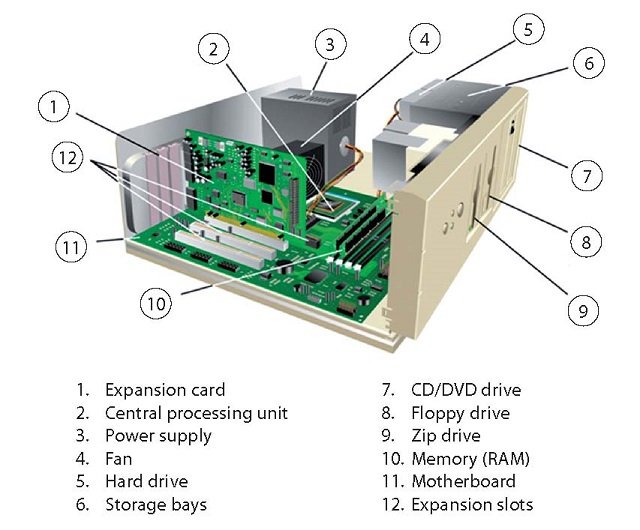 The motherboard is a large board containing a number of electronic components – the CPU (Central Processing Unit), Read-Only Memory (ROM), Read Access Memory (RAM) – the 2 types of main memory, a clock, and the expansion slot.

The CPU, regarded as the brain of the computer, is the most important part of a computer system because it controls and performs all the computer tasks. It is a processor or microprocessor and has 2 component parts – the Control unit (CU) and the Arithmetic and Logic Unit (ALU)

In our other Information Technology posts, you will find:

What exactly is Information Technology (IT)?

Input devices of the Computer Hardware 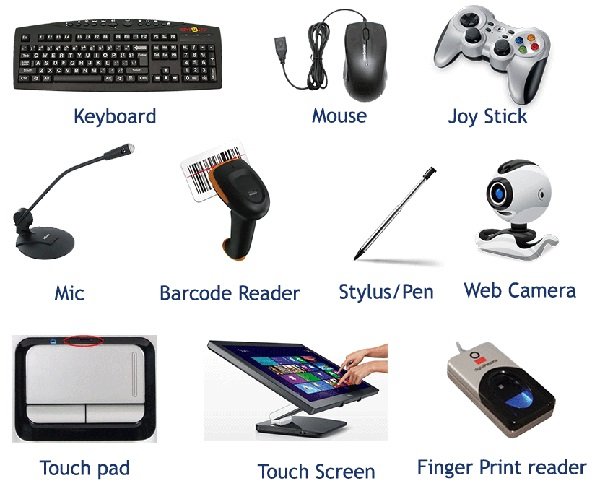 Any data entered into the computer is called an input like name, address, mobile phone number, etc. The input device is any computer hardware component that enables a user to enter data, programs, and commands into the CPU (Central Processing Unit) of a computer.

Examples of Input Devices of the Computer Hardware

There are 5 divisions or sections of the computer keyboard. They are the Alphanumeric keys; the Numeric keys or Numeric keypad (or Calculator keys); the Cursor-control keys (or Text-editing keys); the Special keys, and the Function keys

The computer mouse functions by rolling the rubber ball at the base on a mouse pad to start a movement of the mouse pointer in any direction.

There are 3 buttons for a modern computer mouse. They are the left or default button; the right or short-cut menu button and the scroll or middle button which is like a small wheel. These buttons are used to perform clicks (single, double, and right-clicks) as well as dragging. Drag means to click and hold the mouse button while moving the mouse.

A mouse performs 3 tasks or functions. It is used to draw and paint pictures as well as select an object on the computer screen of the monitor.

A scanner is an input device that sends prepared texts, scanned images and pictures, (such as photos, logos, drawings, diagrams) into the computer system and converts them into a file. It works like a photocopier.

The joystick is an input device used for playing games on the computer. It moves the cursor and other objects on the screen similar to the way a computer mouse works.

The microphone is a device used to input recorded voice data into the computer and then change the voice data to digital signals and stores it.

Touch-screen is a computer screen designed to detect and recognize the location of a touch on its surface and it recognizes input data when pointed and pressed against an object on the screen.

The stylus is a pen used with tablets, smartphones, and PDAs for graphic drawings by touching the surface of the computer device with the tip of the pen. Selections and commands can be controlled by pressing a button on the stylus or pressing the stylus against the screen surface. A stylus can have a cord or be cordless.

A puck is a mouse-like input device of the computer hardware with buttons used for selecting items and choosing commands on graphic tablets. It is usually used in engineering applications. It has a clear plastic section extending from one end with crosshairs printed on it.

It is used to capture and store pictures electronically on the computer. It is used to input both motion and static pictures.

A digital video camera is an input device that enables us to record video in a format that we can save on the computer.

The trackball is a pointing input device that produces horizontal and vertical movements on the screen. Compared to a computer mouse resting on its back, the trackball consists of a ball resting on two rollers at right angles to each other.

It is used to sense the presence of a pencil or pen mark on a paper medium. Optical Mark Reader is common with multiple-choice examination answer sheets.

Optical Character Recognition is used in entering printed characters (data) on paper and defining their shapes by detecting dark and light patterns on the paper.

Magnetic Input Character Recognition used in entering printed characters (data) on magnetic surfaces and determining their shapes by detecting dark and light patterns on the surface.

A digitizer or Frame grabber is an input computer hardware used in computer graphics that uses a video camera to capture, copy and store video images (such as one from the videotape or TV.

Barcode represents data input data in a form readable by a machine. It is a pattern of parallel bars and spaces carrying information. A barcode reader is one of the most efficient means of obtaining data automatically.

Output devices of the Computer Hardware 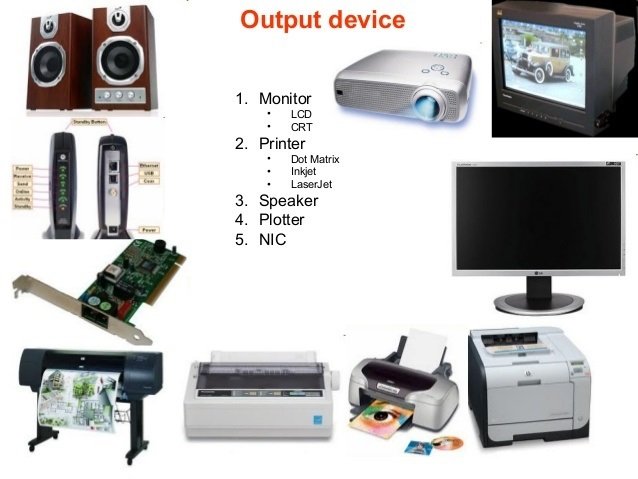 Output devices are pieces of computer hardware component that shows the result of processing operations or data transformations and manipulations (information) produced by the computer and sent to the users.

Output information from the Central Processing Unit (CPU) is in the form of electronic signals which need to be converted into forms (alphanumerical, numerical, audio-visual, and graphical forms) that can be understood by humans.

The output information can be obtained through the following devices: From a computer or TV screen (monitor); in printed form (printer); in graphical form (plotters); in an audible sound form (speakers), and through other output devices (like the modem and headphone)

Examples of Output Devices of the Computer Hardware

A monitor or Video Display Terminal (VDT) is a TV screen-like output computer hardware that displays texts (characters), pictures, and videos (graphics) and produces a soft copy. The display of information on the screen is usually facilitated by the cathode-ray tube (CRT) or the liquid crystal displays (LCD) components.

The monitor has 2 connecting cables. One connects to the source of power while the other to the system unit. Computer monitors are the commonest output device of the hardware.

There are 2 types of monitors. One is monochrome monitor and the other is colour monitor.

The Computer Printer is an output computer device that transfers or copies processes data (information) in form of texts and graphics from the computer onto paper. The paper copy of the information printed is called the hard copy (or printout)

The computer printer has 2 connecting cables just like a monitor. One connects to the source of power while the other to the system unit.

The speaker is an output device that produces sounds (audio) outputs in form of speeches, music, and other sound information.  Speakers are either internally built into the computer system or separately outside the computer as external speakers

A plotter is an output computer hardware used to produce precise and good quality graphics and drawing under the control of the computer system. They are useful in creating maps, architectural drawings, and charts.

It is an output device that produces audio or sound output in a similar way to a microphone. It differs from the microphone in the sense that it is hung to the head and slotted into the ear openings (for the earphone). 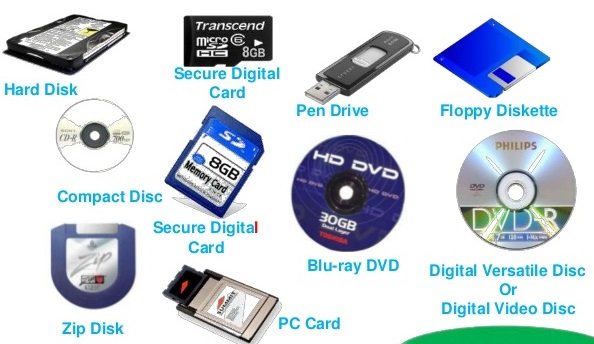 Secondary storage devices are computer hardware outside the system unit used to save data, instruction, and information from the computer. They include are floppy disk (diskette), CD-ROM disc, DVD-ROM disc, and flash disk.

Examples of Secondary storage devices of the computer hardware

The floppy disk can be used to save data, instructions, and information from the computer and transfer it to another computer device and create small backups. Information in the floppy disk is read through a floppy disk drive (FDD) in the system unit.

Floppy disks were occasionally used to store a computer’s operating system (OS), application software, and other data before the hard disks in personal computers were popularized. Floppy disks come in two sizes – the 51/4-inch and 31/2-inch and they are square-shaped.

CD-ROM Discs stands for Compact-Disc-Read-Only-Memory Disc is just like a compact disc (CD). CD-ROM Discs are circular in shape and can save a large amount of data from the computer than the floppy disk. Information in CD-ROMs is also transferable from one computer to another.

Flash disk (or USB flash disk/drive or pen drive) has become a popular secondary storage device replacing the use of floppy disks because it is small, portable, and long-lasting. Flash disks can store a larger quantity of information compared to diskettes and CD-ROM and DVD-ROM discs.

Flash disks can transfer data and information from one computer device to another and can be a very useful way of storing data for future use. 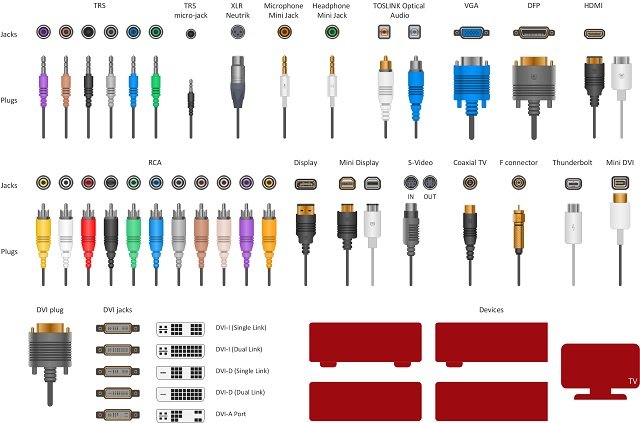 Computer network and data communication service devices are physical components of Information Technology (IT) service infrastructure including the setup and maintenance of equipment like modems, routers, computer servers, telephone (phone) systems, computer cables, and other individual devices like laptops.

Some examples of Computer Network and Data communication Devices

Phone system technology enables users to use a Private Branch Exchange (PBX) in a business, workplace, or school set up to control voice and video calls (place and receive calls, transfer calls, and mute and unmute calls) in the cloud without using expensive and complicated equipment.

Apart from the management of calls, the phone system also enables messaging and online communication and collaboration using supportive consoles like mobile devices, a headset with a laptop or PC, and an IP phone.

A router is a computer internet and data communication hardware device designed to receive, analyse, convert data packets or move them to another network interface. It forwards data packets between computer networks and performs traffic directing functions on the Internet.

The computer cables are used to connect different parts of the computer system hardware like the monitor, mouse, keyboard, printer, system unit together.

The computer cables are used to transfer data at high speeds within the input and output components or devices of the computer. Power cable, USB Cable, Audio Cables, Video (VGA) Cables, Telephone Cable, Network Cable, and Mouse and Keyboard Cables

A computer power cable with a 3-hole female connector is used to connect the system unit to an electrical outlet on the wall. All electronic devices that used alternating current come with a power cable.

Audio cables are used to connect microphones and speakers to the computer. The most common audio cable is the standard headphone jack known as a TSR connector.

The Video Cable or VGA Cable is one of the most common video connectors for computer monitors. The video cable with a 15-pin male connector is used to connect a monitor to a computer.

The network or Ethernet cable connector has 8 wires and a clip to help maintain a tight connection like a phone connector. The network cable, which is similar to a telephone but only in thickness and width, is used for networking.

A mouse and a keyboard cable both have a male connector with 6 pins used to connect them to a computer.

This blog on ‘Computer Hardware and Component Parts’ is categorized under Information Technology Education.